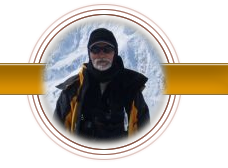 Tore Sunde-Rasmussen (born.1949) from Egersund in the south-west of Norway. He has now after many years in the private business sold his business, and is now doing more or less what he wants do do. For a period he was also working as a professional climber on offshore installations in the North sea. Today he is more or less travelling on expeditions,guiding abroad  and in Norway, and tries to live as close to nature as possible.

Tore has now become the oldest Norwegian and Scandinavian who has climbed Mount Everest.

In december 2008 he was together with his wife successful in climbing Mt.Vinson in Antarctica which completed the 7-Summits.

The 7-summits are the highest mountain on each of the worlds 7 continents.

With his climbing, he wants to show that age is not the limit if you want to reach what you are aiming for. We all have our hopes and dreams. The thing is to grab it. And do it !!!


Tore climbed Mount Everest in spring 2005 as a member of a british expedition where also Sir Rannulp Fiennes was in the team.

In spring 2010 he was back in Nepal and summited Everest for the second time. This time from the south. On this expedition he was assistant guide and  was responsible for the first team who all summited.

Tore is rised and born close to nature, and has for many years been using what nature can give and achieve him both summer and winter. He has been an active climber for years and has climbed a lot of the Norwegian mountains both local and more periphery in summer as well as in the winter period. He was the first to climb Gyaakselen(6+/7-)in 1995 which he also later in a period of two days was soloing (A1) from a different route.


Together with his wife, Inger, the head of HMS in the Norwegian part of Transocean Rig company, also an active climber. They have climbed many of the 4000m. peaks in the alps, including the west-face of Dom. In South America he has climbed Nevado Pisco and Aconcagua (6962m.). When climbing Everest in 2010, he did his 7. climb on 8000m. mountains.


On the Cho Oyu expedition in 2003, he was together with Sherpas the first person to summit that year.


Tore is also training Karate. He is a karateinstructor and has been practising Karate for about 35 years. His grade in karate is Sensei 4.Dan.